Imagine professional
coverage of your
wedding at a fair,
affordable price

The winter wonderland wedding of Jillian & Michael was on January 4, 2014. This was our first wedding of the 2014 season. The ceremony and reception took place at the Log Cabin in Holyoke, Ma. We started our coverage with the bride’s arrival on the shuttle from the D Hotel, owned and operated by The Rosskothen’s, also the owners of the Log Cabin Delaney House. Jillian arrived with her entourage including her sister who was her maid of honor, and her bridesmaids. We began shooting our detail photographs of Jillian’s gown, shoes and tiara. Jillian attached her Grandfather’s ring to her bouquet, and the couple’s class rings on a pillow for their son to hold. Jillian was an avid Pinterest pinner and shared a board with us of her wedding favorites. We incorporated many of them into our coverage throughout the evening.

Michael soon arrived via the same shuttle from the D Hotel and I began their coverage in a separate VIP suite away from the girls. Michael has three brothers who were in the wedding party; we had a lot of fun taking pre ceremony shots with them. Soon it was time for the ceremony which was held in the Mt Tom room which a great view of the mountain out the windows. Mikki Viereck was the Officiant, and did her usual fantastic job. She is one of the few Officiant’s that understands that it is the couples day, and helps us to get great ceremony photos by moving a bit to the side during the vows and first kiss so as not to be in all the photographs. This is a great help to us. Michael was a bit emotional when he first saw his bride. Michael had genuine tears in his eyes the moment he first saw Jillian being escorted down the aisle by her dad.

As soon as the ceremony ended, Jillian & Michael braved the cold temperatures and went out doors to get some sun set photographs of their winter wonderland wedding. The effort was well worth it, we captured some great images of the snow and colorful evening sky on the day of their winter wonderland wedding. The fireplace was lit and added to the ambiance of the moment, and helped with the frigid temperatures. The reception started with introductions by DJ Tania of Mega Musik Productions. The couple proudly entered the Southampton Room to a standing ovation of family and friends. The intros were followed by the first dance and two toasts. The groom had his own lobster dinner, a first for me. The lobster had Green Bay Packers logos all over it, a nice touch to the winter wonderland wedding.

After dinner the couple had sparklers for all their guests. Most everyone went outside and gathered around the couple with lit sparklers in hand. It was a beautiful sight and added to the winter wonderland wedding. Just a moment after snow appeared and we were lucky to get a few quick photos of the snow squall. Finally Mike and his groomsmen had a cigar outside by the fire pit to end the winter wonderland wedding. Check out the Youtube video just below the gallery on this page of the ring bearer in a real funny moment. 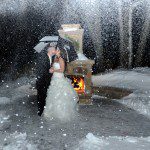 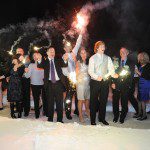 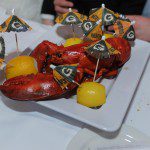 Green Bay Lobster for the Groom 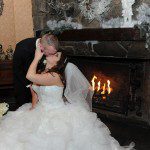 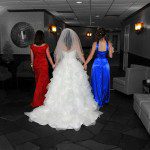 Bride with Mother and Sister 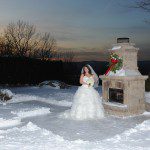 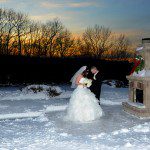 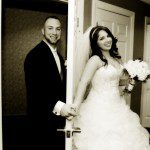